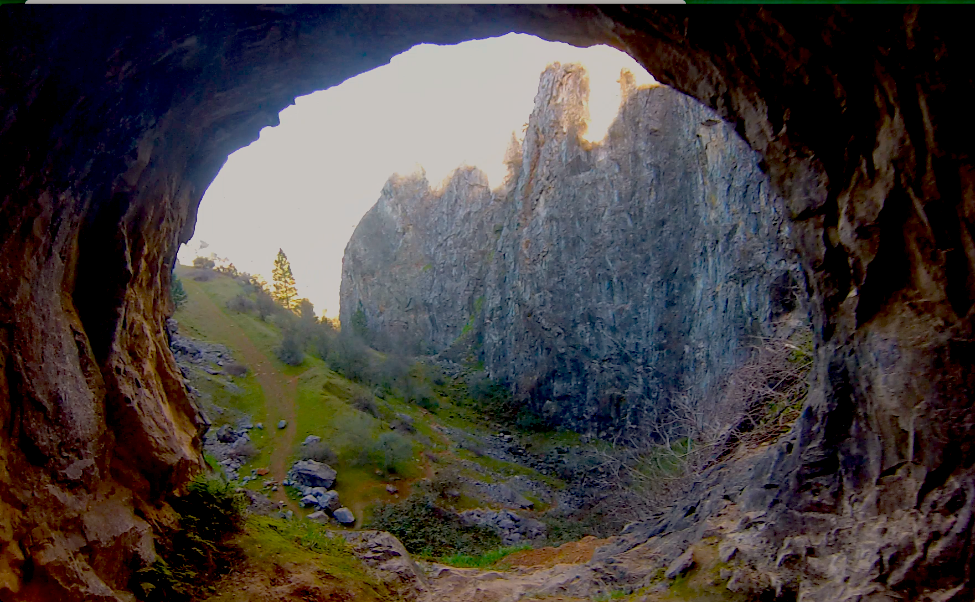 I went spelunking with a friend the other day. We had to drive down this old fire road that hadn’t been maintained. We really needed  an off-road car rather than his wife’s all-wheel drive Honda Pilot, but that is another story.

At the bottom he found a trail that he remembered from when he was a kid and we wound our way back to the front of the cave.

I really didn’t know what to expect. I knew that most cool caves had either been sealed off by some government agency concerned about our safety or had a paid guided tour. I figured since this was neither of the above, it was going to be fairly innocuous. And at the mouth it looked like it … a big cave. I followed my buddy to the back where it looked like it would end. He squeezed through a crack in the wall and was gone.

Caves are dark. Obviously, we had our headlamps but really, like a flashlight, they only light where you are looking. We scrambled through a few tunnels, and into a larger room.  I felt like Alan Quartermain, sealed in King Solomon’s mine. Every room we went into looked like it had to be the end, but my buddy always found a little tunnel to squeeze through and we continued.

“This one is a little tight.” He said as I watched him wiggle through until his feet disappeared.

I’m a big guy, at least 40 pounds more than him with a bigger frame.

All the sudden it wasn’t fun, I felt my knees shake.

I was getting a little panicky all of the sudden.

I asked myself what it was I was afraid of. Getting stuck? Claustrophobic? A cave in?

None of those things were probable. They mostly happened in my imagination. I took a deep breath and crawled forward. We went all the way to the end. It was one of the coolest things I have done in a while.

The next day I had a business-related meeting. I was nervous about the conversation. While I was sitting there, I realized I was having some of the same panicky feelings I was having in that cave.

What was I afraid of? Him not liking me? Making a fool of myself? Him thinking I was a fraud? While all were possible, none were probable. They existed in my head and even if they were real, they couldn’t hurt me. I took a deep breath and smiled and like in the cave, I crawled forward. It was a great meeting.

Because that is the thing about our fears. They won’t go away. No one is fearless. Those fearless people we know, they’re scared too. They just manage it better. The skill is to listen to the fears and decide if it is real danger or just the scary story you tell yourself.

ORIGINALLY PUBLISHED May, 2015 I went spelunking with a friend the other day. We had to drive down this old fire road that hadn’t been maintained. We really needed  an off-road car rather than his wife’s all-wheel drive Honda Pilot, but that is another story. At the bottom he found a trail that he remembered…

Fear is what we fear