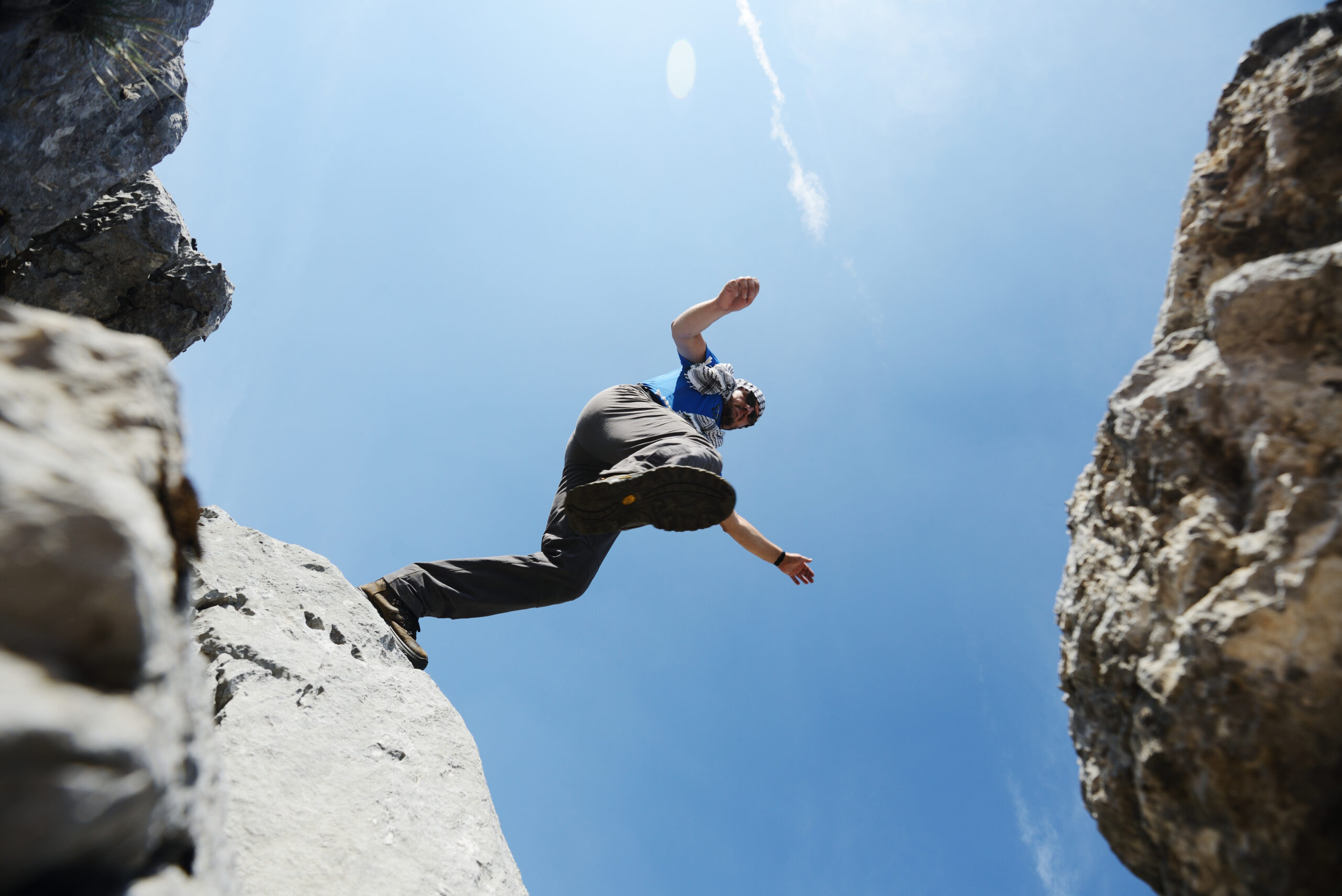 THIS WAS ORIGINALLY PUBLISHED IN JULY, 2014

“The Edge… there is no honest way to explain it because the only people who really know where it is are the ones who have gone over.” – Hunter S. Thompson

I have always had this belief that I was mentally strong. I liked the idea that I could push through, that I could tough it out. It was not just something I told myself to build confidence, Instead, I believed I had built a competence in toughness through a lifetime of doing  things the hard way. Through triathlons, marathons, MMA fights, wrestling, CrossFit style fitness competitions, I’ve learned and been taught how to fight through that desire to stop.

I have a buddy that I trained with. He has never been a boxer and wanted to learn some skills, not so much to learn to box but to learn to get hit — inoculation. Learning to sport fight (boxing, MMA etc.) is a painful process. You don’t always see the attacks, the punches coming at you. If you don’t see them, it’s tough to block or slip them. You have to get hit a lot to learn to see them. After a few sessions, he told me he didn’t think he’d ever connect with a good punch on me.

“It’s impossible,” he said, “Every time I think about hitting you, you punch me in the face.”

But then after a few weeks of training, as we were wrapping our hands and warming up, he came to me with another perspective.

“You probably already know this” he said. “But it’s not really that bad (getting hit). It doesn’t really hurt. Yeah, it sucks but it is more like it’s uncomfortable. Once I realize it is just uncomfortable and I’ll make it through, it’s not so bad anymore. ”

He told me this one afternoon before we geared up and boxed a few rounds. He caught me with his first good straight right at the end of one of the second round. It was the first time he connected with me good. I remember thinking that I liked boxing him better when something like that was “impossible.”

I competed in the inaugural Endeavor Team Challenge last year. It was a 30+ hour, 40+mile adventure race that included hiking, running, rock climbing, mountaineering, orienteering, obstacle courses, and CrossFit Style workouts.I teamed up with Brian, a 50-year-old Marine fighter pilot turned commercial airline pilot. Outside of our standard CrossFit training, neither of us did anything different to prepare for the race.

The day started at 6 am with a undisclosed distance hike with all of our gear at a higher altitude than this flatlander was used to. At one point the trail led to a lake and a rock over a lake. We had to waterproof our gear, toss it in the lake and swim with it to the other side. I leapt and as I submerged, I heard one of the onlookers comment, “Now, that’s a big boy.”

I remember thinking, “No, shit,” as I plummeted all the way to the bottom, scraping my foot on rocks. “This thing was planned for the little guys.”

After the six-hour hike, we spent the rest of the day doing land navigation, mountaineering, rock climbing, a strength challenge, an obstacle course, river swim and a mental challenge. At dark we were loaded up on a bus, driven 30 minutes into the wilderness and dropped off with a map and a compass, and a “good luck.”

The first few hours were fun as we found some of the way points, running around in a dark forest with head lamps. But navigating through the darkness turned out to be like the first time I used a jackhammer: It seemed pretty cool until it wasn’t.

I remember plodding along, watching the dust float through the light beam from my headlamp.. I had blisters. I was hungry and honestly, I was annoyed. This race, I told myself, turned out to be over programmed. I knew it was based on a test that they gave to the Army Rangers as a part of their indoctrination training. But, the difference, I told myself, was that they took weeks and months to build them up to that point. They just threw us into the fire with no preparation. While for Army Rangers it was training, for me it felt like hazing. Fortunately, after this hike, we were going to get some time to rest.

Good thing. The way I figured it, I was at capacity. I knew I had enough in the tank to get back to the camp but that was it. I was already on reserves. I continued along, angry that I brought such a heavy pack, angry that they hadn’t told us to bring extra dry socks in the gear list, angry that they made me bring rain gear (the sky was cloudless), angry that the race organizers had clearly over planned this course, angry at the pain in my foot from scraping the rock in that lake. Everyone, it seemed, was struggling. I could finish this, but without rest, anymore would be impossible.

We found the last trail junction, the one that we knew would take us in. Even though I had nothing left, I picked up the pace. Just one step at a time. Then it came into sight: the camp and race organizers. I would be able to rest and sleep for a bit. As we came across, one of the event organizers took the bricks we’d collected and congratulated us on our efforts.

“But we have a surprise for you,” he said.

I remember the words coming out of my mouth without passing any of the sensors that typically restrain us from uttering phrases like that to people we don’t know well. But I knew what he meant. They had advertised the “OPT challenge”, three CrossFit style workouts. I could see the jump boxes sitting out in the wet field. See, it was just hazing.

Brian reached up and put his hand on my shoulder, “We got this man. This is right in our wheelhouse. Let’s get it done and get some rest.”

I breathed and walked away to get ready for the workouts. Damn him and his older and wiser Yoda bullshit. I figured, I’d do it, but I wasb’t happy about it.

I don’t recall what I was thinking during the workouts. I am sure it was mostly grumbling and cursing. I remember getting to the third workout and Brian asking me if I wanted to take a break before we started.

Nope, lets just get it done.

So we did. Burpees and broad jumps. And finally, they let us sleep.

Briefly. That hour felt like a blink but the next thing I heard was an announcement that the final event would begin in 20 minutes. The final event was a 10 mile run to the lake. We wouldn’t, they told us, have to take our packs.

I was surprised at how good I felt at the beginning of the run.. I was surprised that after the previous days and nights worth of physical and mental abuse, I was able to run at all. But actually, I was going at a good clip, enjoying the trail, the mountain, breathing the air. Even the water tasted great. I realized I was just running and closing in on the finish, not thinking about the pains and the work.

I realized I’d had both good and bad during the race. When I was in a bad, a good would follow and so on. That is the good thing in a long race … whatever you are feeling now will change.

So I enjoyed the run for a while, knowing that somewhere in that 10 mile run, there would be bad times. And I thought back to that moment, the night before, when I’d hit one of those bad times. Actually, one of my worst times. One of the times when I KNEW I had reached my end on that night hike/navigation — where I knew it would be IMPOSSIBLE to hike another mile, let alone perform three workouts.

It wasn’t impossible. Not even close. Not only was it possible but here I was feeling pretty good a few hours later on a 10-mile mountain run.

He was right. The night before, one of the bigger guys in the competition had become very small. I found it easier to believe it was impossible than to just take another step, do another push up or jump on another box. This was a weird spot for me, as I’ve always thought that I believed that nothing was impossible. Not always easy to admit, but there I was.

But impossible was temporary.

And I thought about how many times I might have told myself something was impossible when it wasn’t. How many times had I imposed limits that only existed in my head. How could I possibly have ever known where the edge was, as Hunter S. Thompson said, as I had never gone over?

And really, there was no injury. I was tired and my body and brain wanted to rest, but apparently didn’t require it. It was like my buddy said when we were boxing, I wasn’t hurt, just uncomfortable. For someone who is usually pretty comfortable with being uncomfortable, I was in new territory and that scared me. I was lucky to have Brian to calmly bring me back to the moment and allow me to grow from the experience.

It has been said over and over again, but that is how we grow. Get broken down some and build back up stronger. We all have things that we want to do but anxieties and fears keep us from doing them. I have those fears and anxieties too. But moments like that one in the dark in the Stanislaus Forest reminded me that if I remember I am just uncomfortable and not broken, I can sometimes do the “impossible” because, impossible is just an opinion.

So I kept running through that good feeling until I got to a crappier one. I kept running through that until I felt better again. And on and on because I realized I could. We got to the lake and had to paddle a mile across, climb a mountain, rappel down and paddle back. As we got off the kayak there was a 100 yard or so run to the finish. Brian and I started running. We were exhausted but we had to finish with a run. I couldn’t help but smile, but then the smile faded with a thought, “What if there is another surprise?”

And I remembered back to the night before when I realized we wouldn’t sleep. We’d workout instead. And I remembered that moment on the run, when the trees and the dirt and the sky and the air all smelled and felt and tasted great – when all was awesome.

If this wasn’t the real finish line and there was more, than fine, I’d do that too.  I knew I hadn’t reached the “edge” yet. Impossible was nothing. I smiled and crossed the finish line. Completed.

NOTE: Brian and I signed back up for the Endeavor Team Challenge again on September 6, 2014. Check out the link at www.endeavorteamchallenge.com. The event was amazingly well run despite all the logistical nightmares that must go on for an event like that. Sign up and do it. It will be an experience you will never forget.

THIS WAS ORIGINALLY PUBLISHED IN JULY, 2014 “The Edge… there is no honest way to explain it because the only people who really know where it is are the ones who have gone over.” – Hunter S. Thompson  I have always had this belief that I was mentally strong. I liked the idea that I…

The Value of Adventure